Earth Day 2016 became even more meaningful with the signing of the Paris Agreement at the United Nations Headquarters in New York on April 22nd. French President Francois Hollande was the first to sign the agreement, with Minister for the Environment Alan Kelly signing on behalf of Ireland. The signing of this international agreement became a historical event when 175 countries were present for the signing, the previous record being set in 1982 with 119 signatories on the Law of Sea Convention. The high volume of signatories could see the treaty being operational within a year and an early implementation could prevent the drift that set in with the Kyoto Protocol in the 1990s. 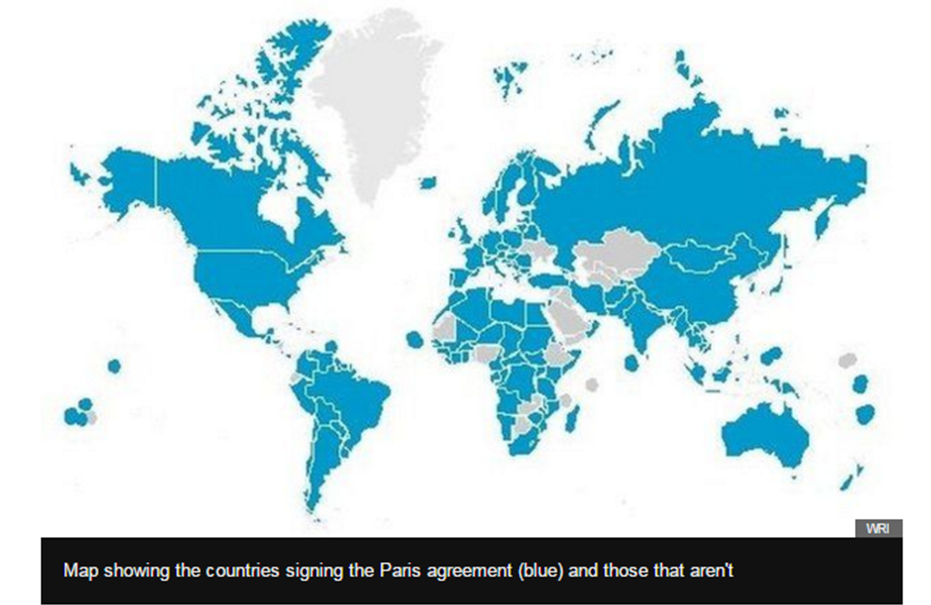 The Paris Agreement was first approved by the 196 Parties to the United Nations Framework Convention of the Climate Change (UNFCCC) in COP21 in Paris on Dec 12th 2015. Following Friday’s event, the period for signatures will remain open for one year until the 17th April 2017. This allows for the time all parties need to sign in order to validate the agreement and ratify it.

Signatories agree to the following:

This landmark agreement signifies the renewed declaration of the signing governments to fight climate change and to end the fossil fuel era. The pressure is on, last year was the hottest year on record – as were the first three months of 2016. Temperatures at the North Pole rose above freezing last December, with temperatures there being 30°C above normal. Temperatures are already a blistering 48°C in Chad, Africa – climate change threatens to obliterate the billions already spent in development aid in recent decades. On Australia’s Great Barrier Reef, approximately 93% of coral is showing signs of bleaching, due to long-term ocean warming due to carbon emissions and the El Niño weather phenomenon.

The signing of this agreement is just the first step, the signing countries must now ratify its contents within national policies. The agreement will not take full effect until at least 55 countries that represent 55% of the world’s greenhouse gas emissions ratify it.

The world’s top 10 emitters currently make up 70% of total emissions:

Source: Carbon Brief, Figures are for 2012

Parallel to the signing of the agreement, representatives of the signing countries will need to make their national statements and deliver the instruments of ratification or specific action plans to combat climate change. These need to be submitted by each country in order for the agreement to be effective. After each nation completes this process, the action plans will be presented to the Depositary under the Secretary-General of the United Nations in New York. It is only when an action plan has been deposited that a country has officially ratified the Paris Agreement.

The European Union is expected to lag behind as it has not yet agreed with its 28 member states on how emissions cuts will be shared out. Each member state will have to ratify the agreement individually. They also must sign off on proposals to achieve the common goal for 2030 of a 40% emissions cut measured against 1990 levels. China, the world’s biggest climate polluter, has stated that it intends to formally approve the agreement before the G20 Summit in September. The United States and India have also reaffirmed their intentions to approve the deal this year.

It seems that the Paris Agreement will be the greatest test of international collaboration in terms of limiting the impact of this generation’s carbon footprint on the world.

How will the Paris Agreement Impact on Climate Change